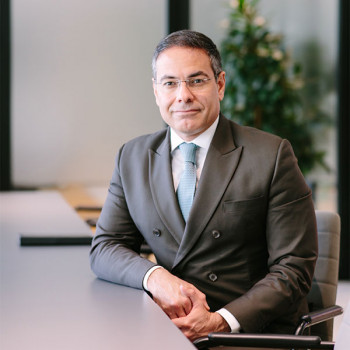 Jimmy Haoula Managing Partner jimmy.haoula@bsabh.com
UAE has in the past seen a financial crisis which exposed some of the inherent weaknesses of conventional systems of financing. With the slower economic growth and unsteady market conditions, investors are opting for stable, well-governed, financial options which dole out high yielding returns. Maymoona Talib looks at some of the most innovative solutions being explored by UAE banks that are helping to promote the growth of Islamic finance.

Islamic banking has witnessed an upward trend, growing almost 50% faster than the overall banking sector in several core markets including the UAE. A number of banks in the country have arranged Islamic fi nance deals worth millions of dollars for refinancing transactions, syndicated lending, etc., which indicates the demand for Islamic retail and wholesale banking products. These will continue to remain strong, as the awareness of ethical investment grows with several world Islamic finance conferences being held in the UAE year after year.

Based on market reports, the publicly listed Sukuk market alone was valued at approximately US$10 billion in 2012, making Dubai a key player in listed Sukuk issuances after world leaders Malaysia and London. The UAE has seen Sukuk issuances not only by banks but also by quasi-sovereign issuers growing considerably. This is evident from the US$2.75 billion Sukuk listings by the Dubai government, Emirates Airlines and Dubai Electricity and Water Authority on the NASDAQ Dubai and the Dubai Financial Market which took place this year. It is noteworthy that as of May 2013 London, a world leader, has not listed any Sukuk, which gives Dubai a lead in the sector.

Innovative Islamic finance products and techniques have been established in the UAE, for example:

• Very recently, MasterCard introduced credit cards under Murabahah (cost plus financing) and Wakalah (agency) contracts, which are structured in a strictly Shariah compliant manner following the principle of equity. Customers are required to pay service charges only upon usage of the card, unlike the common practice of paying fi xed monthly fees irrespective of the usage.

• Similarly, a UAE bank is offering a Takaful (insurance) product, which offers breast cancer Takaful coverage. This is a pioneering innovation which actually addresses the financial needs associated with a common cause for death among women.

UAE banks are playing a vital role in extending the growth of Islamic finance in various jurisdictions. A Wakalah agreement signed between a UAE and Omani Bank, following AAOIFI standards, helped build a platform for the Omani bank to engage with international Islamic banks for their interbank liquidity management. In Turkey, a UAE Bank has completed Islamic capital market mandates valued at over US$1.4 billion, positioning itself as the leading gulf bank executing Shariah compliant syndicated facilities in Turkey.

Although the UAE has the culture and heritage, it lacks the infrastructure to achieve its goal of becoming the global leader of Islamic finance. The key deterrents are the lack of clear Shariah governance and diverse ideologies of Shariah scholars on similar subjects. Also, the dependency on Shariah scholars to sign off each new structure, transaction or product entails a requirement for more scholars. This develops another difficulty – the shortage of Islamic scholars and the deficiency of professional institutions and colleges, which train and provide quality Islamic finance education for new scholars. The lack of such services makes carrying out Islamic finance business time-consuming and, at times, financially inefficient.

Sheikh Mohammed Rashid Al Maktoum, the UAE vice-president and prime minister, has an executive plan to transform Dubai into a center of Islamic economic activity and looks at producing radical initiatives which will correct anomalies and transform optimistically the methods and conduct of Islamic finance in the UAE.

One of the features of this movement is enhancing issuance, listing and trading of Sukuk, which will in turn encourage institutions to issue Sukuk in place of conventional bonds. It also focuses on streamlining the issue of having a unified governing Shariah board, which will encompass the formulation of common standards and regulations for Islamic finance activities and will also put in place a process for conducting Islamic contract arbitration.

While each emirate has Halal (Islamic law abiding) food compliance checks done at a municipal level, there are no general standards and regulations. Steps towards standardization for the Halal food, fashion and cosmetic industries have now been initiated. The Emirates Standardization and Metrology Authority is mandated to formulate Halal codes. This move aims at growing the trade of Halal food and products from US$3.6 billion in 2010 to US$8.4 billion in 2020.

This vision, along with the competitive advantages that the UAE off ers – such as 100% foreign ownership, tax exemption, capital repatriation, internationally accepted laws and regulations and given that most of the local and regional wealth arises from Shariah compliant avenues — places the UAE in an advantageous position over the rest of the world.