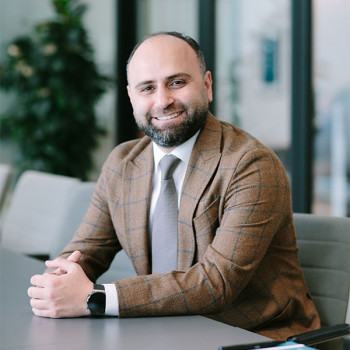 Munir is a Partner and Head of the Intellectual Property based in our Dubai office.

He began his practice in the Middle East in 2006 and has worked on numerous scopes of intellectual property, media, cyber and technology matters. He also worked on different corporate and commercial projects, such as transactions and contracts, due diligence, advisory on commercial context, competition and employment matters. His main speciality is in the field of IP and media including trademarks, copyrights, patents, trade secrets, domain names, media advisory, regulatory compliance and representing in contentious matters. He also works on commercialization of IP and handles complex disputes of IP and media rights.

Munir also works on major alternative dispute resolution cases that involve negotiations and settlement mandates, as well as managing litigations locally, regionally and internationally. For cases in the MENA region, Munir collaborates with local litigation practice groups and litigators to supervise such disputes.

Munir represents a range of clients from various industry sectors, including Media, Entertainment, FMCG, Tobacco, industrial, pharmaceuticals, automotive, cosmetics and many more. His principal set of expertise encompasses negotiations, settlement mandates and litigation. He has successfully resolved critical commercial disputes related to media, technology and IP deals. He has extensive experience in regulatory works and has experience in consulting clients on consumer protection, antitrust and competition law.

Munir works with many multinational clients and is ranked by leading legal directories, such as Chambers Global, Legal 500, The Best Lawyers, World Trademarks Review (WTR) for many years. Munir is praised for being a “very commercial and proactive lawyer” who maintains a high level of responsiveness, “He always assesses legal risks and simplifies potential legal impacts in a simple and clear manner for decision making”.

In keeping with the UAE’s strategic objectives and improving its legislative landscape to meet all modernization criteria, the UAE has endeavoured to improve and enhance all IP legislations over the...

2021 in Review: The Legal & Regulatory Changes Impacting Intellectual Property in the UAE

In 2021, there were changes of laws and a new set of regulations enacted in the UAE. We also saw major developments in Government practice and procedures. For instance, the...

Modernized System of Intellectual Property Protection in the UAE

The UAE witnessed recently the largest legislative reform in the history of the UAE by enacting more than 40 different decree laws and amendments in 2021. Following to the new...

This chapter forms part of the Anti-counterfeiting Law Over Borders...